A low-cost traffic ticket lawyer with My Price Lawyers is committed to helping individuals who have received a traffic or speeding ticket. Whether you are a first-time offender or you have lost your license after several speeding tickets, My Price Lawyers may be able to help you get your ticket dismissed or the charges against you reduced. 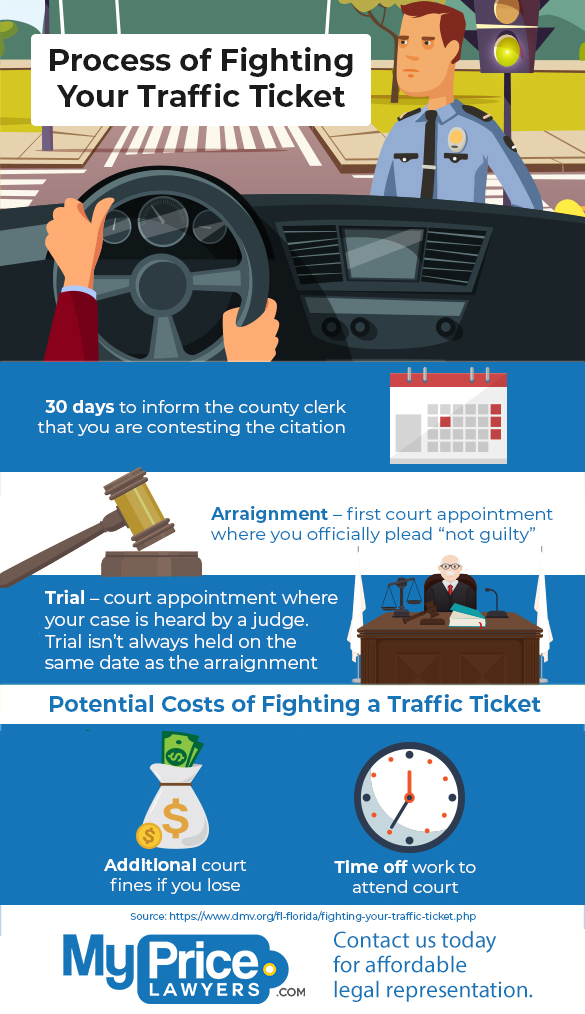 A driver’s driving record is valuable. After receiving a traffic ticket, you may wonder how you are going to pay for the ticket, let alone the car insurance premiums that may increase. Even the most minor Florida traffic violation can impact a driver’s driving record. The Florida DMV puts points on your license for most traffic infractions, therefore getting more than two tickets could cause you to lose your license. Traffic violations include, but are not limited, to the following:

A traffic ticket can cost you more than a fine. If you were cited for a moving violation such as speeding or reckless driving, this could potentially result in a license suspension or even a revocation in the case of repeat offenses. However, did you know that you can fight your ticket?

If you have received a single traffic violation or multiple traffic tickets in Tampa, Sarasota, St. Petersburg, or nearby area in Florida, you have the option to hire a traffic ticket lawyer to fight your traffic ticket and prevent it from negatively impacting your driving record and possibly your insurance rates. Each county has different procedures on how to handle traffic cases and it is important to have someone representing you that knows how each county operates. An experienced traffic defense lawyer is able to help you understand your rights in the court of law.

If a police officer cites you for a moving violation, such as speeding or reckless driving, the citation could lead to a license suspension or even a revocation in the case of repeat offenses. There are three types of speed limits that are shared across all 50 states: absolute, presumed and basic. In order to come up with the best dispute for your speeding ticket, you or your traffic ticket lawyer will need to be informed on which one of the three types of speed limits you were cited for.

To learn more about how to dispute a speeding ticket, contact My Price Lawyers today at (888) 473-6137 to hire one of our experienced and skilled traffic defense lawyers at a price you can afford.

Get a Traffic Ticket Dismissed

Typically, a traffic ticket lawyer is able to get a traffic ticket dismissed if the officer who issued the ticket does not appear in court, if the driver agrees to plea to a less serious non-moving violation, or if the driver complies with an unsupervised probationary period. Another one of the most common ways one can avoid standard ticket penalties is by attending traffic school.

If a judge offers the penalty of traffic school in place of you receiving a more serious penalty, then it is suggested that you seriously take the offer into consideration. Attending a Florida driving school helps to reduce the cost of your auto insurance, get your traffic ticket dismissed, avoid more points on your driver’s license, remove existing points from your driving record, reinstate a suspended driver’s license and more. In most states, a driver has the option of completing the 4- to 12-hour curriculum online or in a classroom.

Paying for a Traffic Ticket

Most courts will allow drivers to establish a monthly payment agreement to pay off a traffic ticket. It is essential that drivers pay on or before the due date. Not paying your traffic ticket may result in the court requesting the department of motor vehicles to suspend your driver’s license, additional fees may be imposed, traffic school attendance may be denied, and a warrant for your arrest may be issued for nonpayment. There are even instances where a traffic ticket is sent to collections and placed on the driver’s credit report.

DUI – Driving Under the Influence in Tampa, FL

Regardless of the circumstance, if there is ever a time that you feel incapable of operating a vehicle safely at peak mental and physical capacity, then you should simply not get behind the wheel. When you drive under the influence of illegal drugs or alcohol you are putting yourself and every other driver on the road at risk of being in a life-altering traffic accident.

Driving under the influence causes accidents and deaths every day, so the penalties in Florida are severe. In fact, many drivers are unaware that a DUI conviction will stay on your Florida driving record for a grand total of 75 years. In addition, drivers who are charged and convicted of a DUI face jail time, loss of their Florida driver’s license, major fines and a drastic increase in their future car insurance premium.

In the state of Florida, there is also a Zero Tolerance law for drivers under 21. Zero Tolerance means that any driver under 21 caught driving with a blood alcohol level of 0.02 or higher will automatically have their Florida drivers permit suspended for six months. So if you are under 21 years of age this essentially means that you cannot have a single drink and get behind the wheel of a vehicle. For drivers who are 21 years and older the legal limit for blood alcohol level is 0.08.

If you have been cited for a DUI, and depending upon the severity of the case, then you may need to contact a criminal defense attorney who specializes in this area.

Find a Low-Cost Traffic Ticket Defense Lawyer Near You Contact My Price Lawyers for a Free Case Review!

When you choose My Price Lawyers we will pair you with a knowledgeable traffic ticket lawyer near you who will use his or her experience to identify flaws in the case brought against you. Any given affordable traffic ticket lawyer in the My Price Lawyers network is well-versed in legal language and specializes in local traffic laws and codes. They are able to reduce traffic ticket penalties, negotiate a more preferable penalty, or get your traffic ticket dismissed entirely. Call us for a free case review.  The traffic defense lawyers in our network represent clients from Tampa, Orlando, Lakeland, St. Petersburg, Brandon, Clearwater, Sebring and throughout the state of Florida.